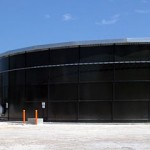 The CompanyÃ¢â‚¬â„¢s first desalination equipment was located near this site, which originally housed a wastewater treatment plant. Mechanical vapour compression distillation units were installed on this site starting in 1979. Seawater for these units came from an open sea intake located just off of Seven Mile Beach and the water produced was used to service some of the first tourist properties located along Seven Mile Beach.

Grand Cayman has very limited low salinity groundwater resources and prior to the CompanyÃ¢â‚¬â„¢s introduction of desalination to the island, homes, businesses and hotels relied primarily on rainwater collected in cisterns. The introduction of desalination by the Company was instrumental in assisting in the islandÃ¢â‚¬â„¢s property development growth and prosperity over the years.

In addition to the desalination equipment, this site also includes 3.0 million US gallons of potable water storage, disinfection equipment and distribution equipment. This facility is one of three located in the CompanyÃ¢â‚¬â„¢s distribution service area for Grand Cayman. The drinking water produced by these facilities is distributed via the CompanyÃ¢â‚¬â„¢s pipelines to homes, businesses, hotels and tourist accommodations in the area, under an exclusive long-term license with the Cayman Islands Government to produce, distribute and sell potable water.

Because the cost of electricity on Caribbean Islands is typically 4 to 5 times greater than in the United States, and Grand Cayman is no exception, a critical factor in the design and operation of this plant is the overall energy efficiency of the facility. To that end, the plant utilizes the advanced Calder DWEERTM (Dual Work Exchanger Energy Recovery) system to maximise the recovery of energy from the high pressure brine stream.

Raw seawater for the plant is obtained from wells located on site, which avoids the need for expensive pre-treatment equipment and chemicals associated with open sea intakes. However, the raw seawater does contain hydrogen sulfide, which is removed from the final product using a degasifying tower.

Visit our Retail website at www.caymanwater.ky for more information on our retail customer services.